Happiness in the Himalayas – A Solo Journey of PEACE

While the thought of going on an adventurous off-the-beaten-track holiday appeals to most people, the feeling resonates a little differently for me. Don’t get me wrong, taking solo hikes can be an adventurous way to spend your holidays. However, my few weeks in the Himalayas have changed me for the better. For this, I am grateful, and today, I would like to share my experience with you.

It all started in August 2022 when I was diagnosed with a terrible illness that kept me bedridden for two months. This illness was both physically and mentally debilitating and left me with severe insecurities with early symptoms of depression. Recuperating from hereon wasn’t just about taking my meds or getting adequate rest; something drastic (read: out of the box) had to be done. I needed to be challenged, put out of my comfort zone, and, most importantly, I wanted to be inspired.

While contemplating ideas, I stumbled upon pictures on social media of the majestic Himalayan Mountain ranges in full glory. This was my calling I realized, though with a lot of self-doubt: “what if I get lost”, “who will accompany me”, and “how will I communicate with people”? I realized this had to be done, and without a travel companion! It would have to be done solo.

I arrived in Srinagar (Kashmir) on October 4th. As this was my first journey to the north, I decided to stay in the city and plan my trip over the next two weeks. While there, I visited the serene Dal lake and took a Shikara (local boat) ride, where I got to see the bustling floating markets and the beautiful surrounding mountains.

The next day I got up early for a short trip to Gulmarg. My expectations were very high, and boy, was I not disappointed. I rode the incredible Gulmarg Gondola (Asia's longest and highest cable car), where I got an aerial view of the Kashmir valley. I was also able to see Pakistan, albeit from a distance. I made my way back to Srinagar in the evening and prepped for my next part of the journey further up north to Pahalgam → Sonamarg → Kargil, and finally to Leh.

Arriving at Pahalgam, I was initially very anxious, not knowing where to go and if an English-speaking person could give me directions. I was out of luck and quickly realized that communicating with the locals was going to be a problem. However, I was pleasantly surprised by how friendly the locals were, and I quickly adjusted to speaking my broken Hindi. “Bhaaiya thoda chai chahiye” (brother, I would like some tea) and “app kaise hai” (how are you) were some noteworthy examples to which I successfully grew accustomed.

After gaining back some lost confidence, I decided to take my first hike through the beautiful mountains of Sonamarg and Pahalgam. Looking back, I must say that this was the highlight of the entire trip. I followed a narrow path with the occasional horse droppings to let me know that I was on the right track. The scenery was right out of a movie set – beautiful mountain peaks in the distance with greenery all around. I was also greeted by snow when I arrived at the Doodpathri meadow, which heightened the experience even further.

The final leg of my trip was to the old city of Leh. Because of the higher altitude of the city, first-timers are prone to altitude sickness; however, I was pleasantly surprised when I naturally acclimated to my surrounding quickly. I was informed by a local that the best way to get around the city and surrounding sights was by motorcycle. Having barely ridden a bike before, I was not sure about my decision, although my experience riding a scooty on the streets of Bangalore reassured me of some of my misgivings. I hired a RE Himalayan and hit the road by first visiting Shanti Stupa- Thiksey monastery. I also visited Diskit monastery in the Nubra valley, which is purportedly the oldest and largest monastery in the world. 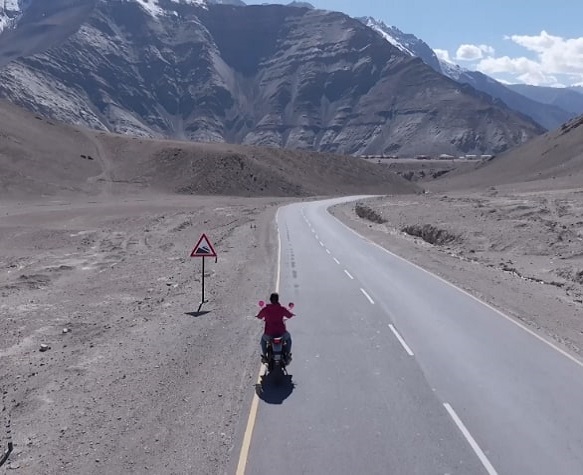 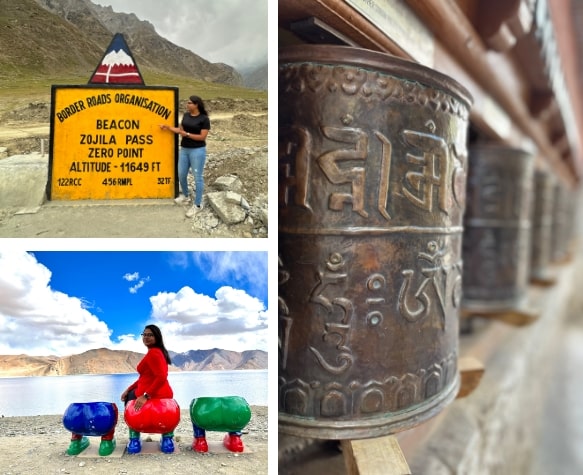 After a tiring day of motorbike riding, I finally returned to my hotel, and alas, as the saying goes, all good things come to an end – my journey through the Himalayas was finally coming to an end.

Having returned home after the memorable two weeks, I have a spring in my step and a feeling that I could take on the world. My journey through the Himalayas has not only healed me but also given me a new sense of purpose. Looking back, I say:

“till we meet again ol’ broken roads,
when I bring my old self to be made whole again”